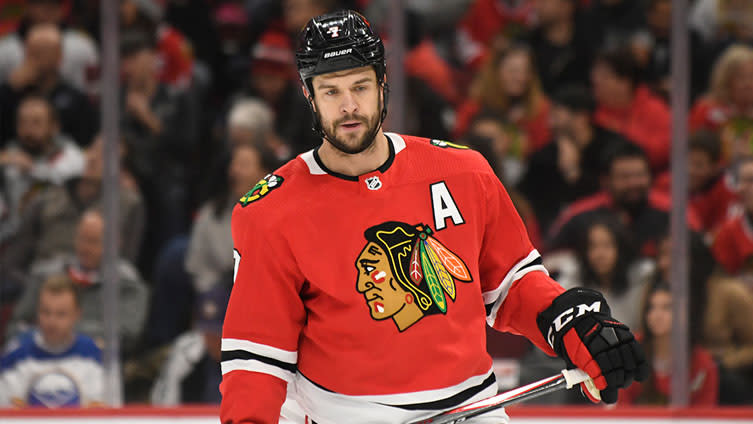 The NHL put its 2019-20 season on pause March 12 due to the COVID-19 pandemic but remains hopeful to award the Stanley Cup at some point. Although it’s unclear if or when it could return, NBC Sports Chicago will recap the season of each Blackhawks player to date in our “season in review” series. Next up is Brent Seabrook.

Brent Seabrook has been an absolute warrior for the Blackhawks. Only Duncan Keith has logged more regular season and postseason minutes on the team since the league began tracking ice time in 1997-98 than Seabrook, who played a large role in all three Stanley Cup runs both on and off the ice.

But it was a trying season for the 15-year veteran. He was a healthy scratch twice early on and grew frustrated with his role.

Prior to those healthy scratches, Seabrook recorded only one point, had a minus-5 rating and averaged 17:39 of ice time. From then on, he registered three points (one goal, two assists), had the second-best rating on the team over that span (plus-5) and his ice time increased to 18:21 per game.

But on Dec. 18, Seabrook found himself on the outside looking in again. He didn’t travel with the team to Winnipeg the next day, which raised some concern. One week later, the Blackhawks announced Seabrook would undergo season-ending surgery on his right shoulder and both hips.

After a decade and a half of wear and tear on his body, Seabrook figured it was time to get healthy and make sure he’s at full strength for the 2020-21 campaign. And while there are question marks regarding his future – his contract runs through the end of the 2023-24 season and carries a $6.875 million cap hit – Seabrook seems more determined than ever to show the Blackhawks he still has a lot left in the tank.

“I’m feeling great,” Seabrook said on April 29 during NBC Sports Chicago’s “Be Chicago: Together We Can” fundraiser benefitting the Chicago Community COVID-19 Response Fund. “I’m feeling really good. Things are moving in a good direction. Hopefully I can get on the ice or even Rollerblade now with the new world we live in, rinks not being open. … I’ve been progressing pretty good and I’m just looking forward to getting back with the team and being able to skate as I’m sure everybody is.”

Because the COVID-19 pandemic forced the NHL into taking a lengthy pause, there’s a possibility Seabrook could be cleared to return in time to finish the rest of the 2019-20 season – whenever that may be – which would certainly be interesting if the league expands its playoff format to 24 teams.

Where he’ll fit in the lineup is a separate discussion, but the fact Seabrook is battling back from three major surgeries in a month span to continue his playing career is inspiring. He deserves a chance to prove he can still be an effective player when fully healthy.

Attention Dish and Sling customers! You have lost your Blackhawks games on NBC Sports Chicago. To switch providers, visit mysportschicago.com.

Click here to download the new MyTeams App by NBC Sports! Receive comprehensive coverage of your teams and stream the Blackhawks easily on your device.

Focus on Healthy Foods, Not Avoiding ‘Bad’ Ones, for Heart Health: Study
Families still need care, but many are afraid of nursing homes amid the coronavirus pandemic
Advertisement