MONDAY, Sept. 10 (HealthDay News) — As expected, young children who are overweight consume more calories each day than do their thinner peers, a new study says.

But, in a decidedly unexpected finding, the researchers also discovered that older overweight children may actually consume fewer calories daily compared to their healthy-weight counterparts.

“The message for society and parents is: Don’t assume that a child who’s overweight is overeating. Obesity isn’t just a simple matter of eating more,” said study author Asheley Cockrell Skinner, an assistant professor of pediatrics at the University of North Carolina, in Chapel Hill. “Be sympathetic. Overweight children reported eating fewer calories, and to lose weight, these kids have to eat even less. It’s probably even harder for them to lose weight than we give them credit for.”

Results of the study were published online Sept. 10 and in the October print issue of the journal Pediatrics.

The study included dietary information from nearly 13,000 children between the ages of 1 and 17. The information came from U.S. National Health and Nutrition Examination Survey, which was conducted from 2001 to 2008. The population included in this study is representative of the U.S. population.

The food-consumption data were collected on two separate days, and children and their parents were asked to recall what the child had eaten in the last 24 hours and how much they ate of any particular food. The researchers had a number of representative measuring devices to try to get the best approximation of portion size that they could.

Cockrell Skinner and her colleagues believe that activity may play a big role in these findings.

“Overweight children tend to be less active,” she said, but added that other factors are likely at play. “The body has complex reactions to how much you eat, when you eat and your activity levels. And, we just don’t completely understand these reactions yet,” she explained.

Another expert agreed that a variety of factors influence body weight.

“There’s no question that overweight and obesity are multi-factorial. Some of it is caloric intake, some of it is genetic components, some is changes that happen in your metabolism, and new research suggests that the bacteria that live in us are different in normal and overweight individuals. So, there are a lot of interesting components that contribute to weight gain, and we’re not sure how to change them all,” said Dr. Edith Chernoff, director of Premier Kids at La Rabida Children’s Hospital, in Chicago.

“The things you can control are how much you eat and how active you are,” she noted.

If your child is already overweight, Cockrell Skinner said it’s important to encourage activity. And, she said, even though overweight children may already be eating fewer calories, if they eat even less, they will lose weight.

“The younger you address these issues, the more you’ll end up with healthy adults,” Chernoff said.

Both experts stressed that preventing overweight and obesity is crucial. “It’s easier to stay at a healthy weight than to try to lose weight and maintain the weight loss,” said Chernoff.

That’s why educating parents and children about proper portion sizes is very important, Chernoff said. Parents often worry that their children aren’t eating enough, but a child will eat significantly less than an adult, and in general, “the child is usually eating what they need,” she said.

Cockrell Skinner said that problems arise in young children when parents push their children to eat more after they’re full.

Some children are overweight because they have big bones.
See Answer 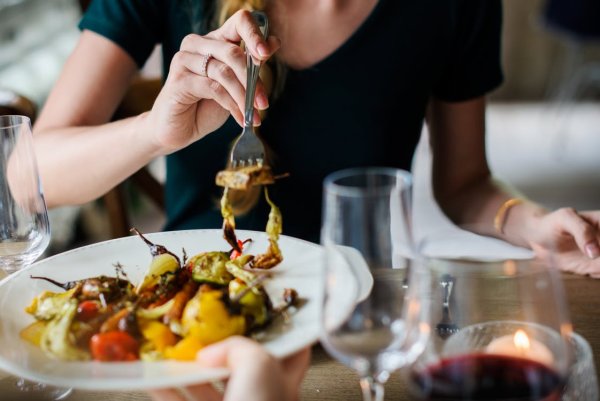