What are the best and the worst alcoholic drinks on a keto diet? First the obvious: Alcohol is not a weight-loss aid. The more alcohol you drink, the more weight loss may slow down, as the body tends to burn the alcohol before anything else. Drinking alcohol can also make people want to eat more.

With that said, there is a huge difference between different kinds of drinks when it comes to how many carbs they contain – some are pretty ok, some are disasters.

The short version: wine is much lower in carbs than beer, so most people who eat keto choose wine. Pure spirits like whiskey and vodka contain zero carbs, but watch out for sweet drinks – they may contain massive amounts of sugar.

For more detail check out this guide, the lower-carb (i.e. keto) options are to the left.

Disclaimer: Consumption of alcoholic beverages impairs your ability to drive a car or operate machinery, and may cause health problems if consumed in excess. Note that on a keto diet you might need significantly less alcohol to get intoxicated. Women should not drink alcoholic beverages during pregnancy.

The numbers represent grams of carbs per a typical serving – for example one glass of wine or one draft beer. Note that sweet brands of wine or sparkling wine may contain more carbs, while other brands may contain a bit less.

Even on a keto diet (below 20 grams per day) you can probably have a glass of wine fairly regularly. And on a moderate low-carb diet, wine is not a problem.

Please note that dry wines usually contain less than 0.5 grams of sugar per glass. The other substances, often counted as carbs, constitute miscellaneous remains from the fermentation process, like glycerol, that should have a minimal effect on blood sugar or insulin levels. Using the number 2 grams of carbs per glass of dry wine is conservative. All dry wines fit well within a keto diet.

Beer is a problem on keto. There’s a reason people talk about “beer bellies”. There are lots of rapidly digestible carbs in beer – it’s been called liquid bread. For that reason, unfortunately, most beers are a disaster for weight control and should be avoided on keto.

Note that the amount of carbs in beer vary depending on the brand. There are a few possible low-carb options for keto. Check out our keto beer guide below for details. 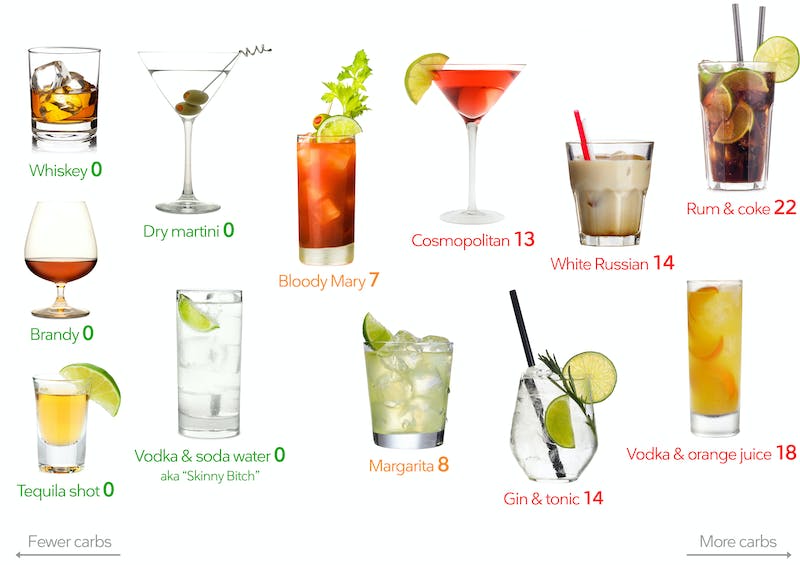 The numbers represent grams of carbs per drink, e.g. what you’ll get if you order one in a bar.

When it comes to drinks, it’s pretty straightforward. Pure spirits like whiskey, brandy, cognac, vodka, gin, and tequila contain zero carbs and they are all fine on keto.

However, avoid sugar-sweetened drinks. Don’t add juice, soft drinks, or other sweeteners like sweet cream to spirits. Adding tonic to zero carb gin boosts its carbs to 16 grams per serving! Have vodka, soda water and twist of lime instead for a no-carb summer drink.

The worst option of all is to mix alcohol with soda or juice; this will be a sugar bomb. 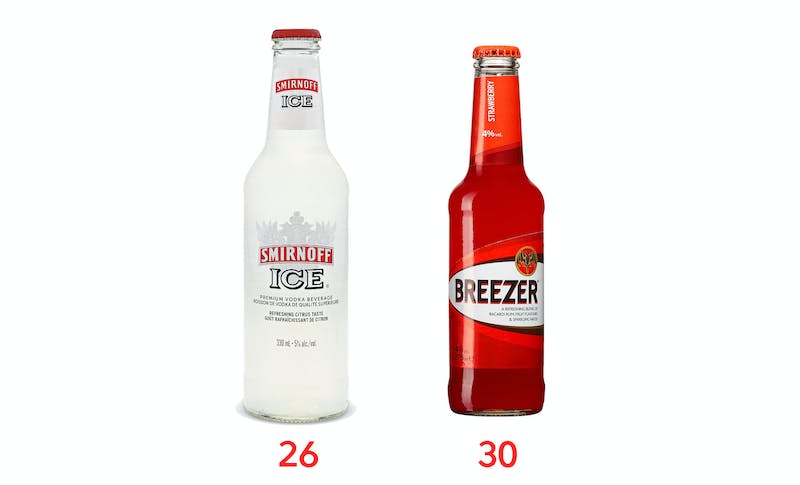 The numbers represent grams of carbs (sugar) per bottle.

So, what about alcopops / wine coolers? They’re just like regular soda with alcohol in them, and should be avoided by everyone who wants to avoid drinking massive amounts of sugar. 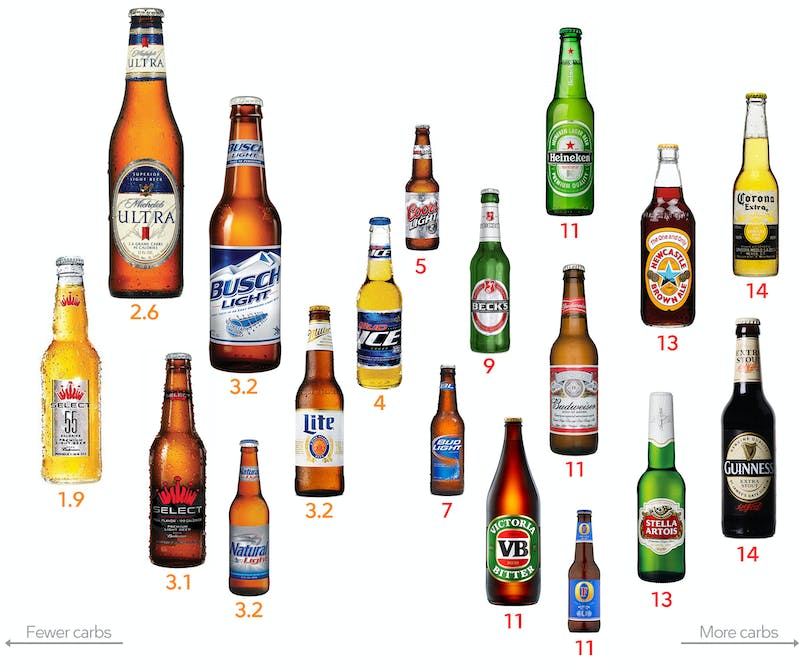 There are huge differences between different brands, but most contain too many carbs to fit a keto diet. Even on a more liberal low-carb diet it might be wise to keep beer drinking as an occasional thing.

The exception is very light American beers. Many of them contain few carbs, so if you like them you are in luck. Check out the brands to the left in the graphic above. 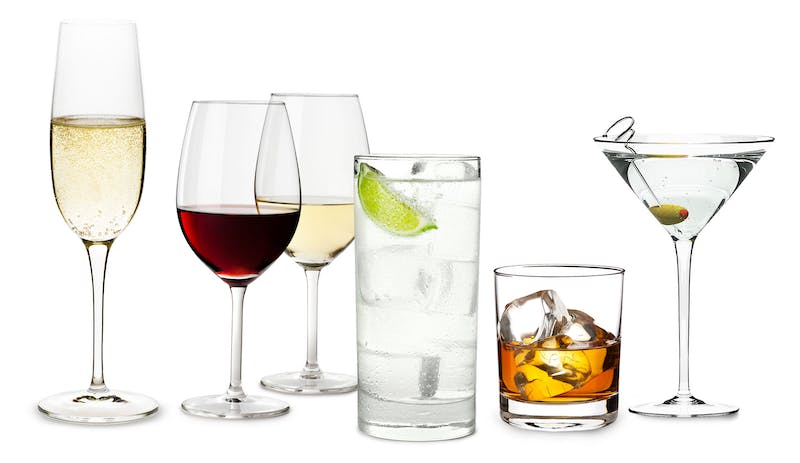 On a keto diet, you can still enjoy a delicious drink or two on special occasions. Even though many alcoholic drinks contain a lot of sugar, there are still some really good keto options, with little or no sugar or other carbs. Here’s our list of the top 5 keto alcoholic drinks.

Pop the bubbly for a low carb toast to good health. Whether it is expensive Champagne from France, or other more affordable sparkling wines like Cava or Prosecco, from other countries, look for the driest versions and enjoy as an aperitif, with food or as a stand-alone drink.

“Beer is made by man, but wine is made by God” said Martin Luther. Some have called it the fourth macronutrient, after fat, protein and carbs. It has been part of human civilization for at least 8,000 years — and no wonder, it pairs so wonderfully with food and friends. Fortunately, dry wine from time-to-time is fine on a keto diet.

The go-to drink of the “Real Housewives of” TV franchise, skinny bitch has the country-club cachet but not the carbs of the old standby gin-and-tonic. Sparkling, light and refreshing, it consists of just vodka, soda water, and lime, perfect to sip and dish the dirt.

“Whiskey is liquid sunshine,” said George Bernard Shaw. Whether you like it neat, with rocks, soda or water, it’s zero carb and gluten free, even though it comes from fermented grains. Scotch, Irish, Canadian, Bourbon, Rye — whatever its name and style, it’s okay for a special occasion.

In the books James Bond liked his martini with 3 parts Gordon’s gin, 1 part vodka, and a half jigger of Kina Lillet. On the screen it was always a vodka martini with a whisper of vermouth, garnished with a lemon twist. It’s a strong drink, even for a secret agent. Whether made with gin or vodka, and garnished with an olive, a lemon twist or a pearl onion, martinis remain one of the most popular aperitifs — shaken, not stirred, of course. 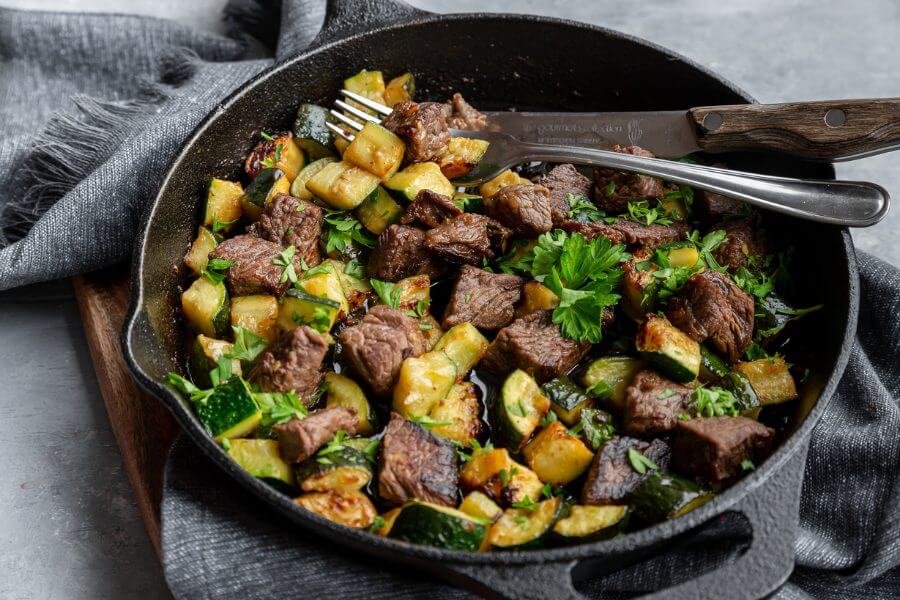